In 1991, a group of students from Environmental Sciences (‘’Milieukunde’’) wanted to have their own study association. At the time they were part of study association V.U.G.S. from Social Geography and Planning. On the 17th of October 1991, the first official meeting of the environmentalists took place, led by Rick Hoeksema. The goal of the meeting was to establish a new study association at the University of Utrecht without commitment to V.U.G.S.. This did not happen right away. First, Storm became a separate division within V.U.G.S. with a board and their own financial system. After that, Storm transforms into an official committee within V.U.G.S..
On the 12th of December 1991, the first General Meeting of Storm takes place. Rick Hoeksema, who was the interim-chairman until that time, charges Detlef van Vuuren as the chairman of Storm. On February 5th, 1992 two important decisions are made: the committee of environmental sciences will be named Storm (STudenten ORganisatie Milieuwetenschappen) and the founding date is December 12th, 1991. On this date, we still celebrate Storm’s birthday, despite the fact that at that moment Storm was not an official association yet because V.U.G.S. kept denying the request of Storm to become an independent association. On the General Meeting of May 13th, 1992 chairman Detlef van Vuuren gave an impressive speech that convinced V.U.G.S., and Storm became an official association after the Articles of Association were signed on July 17th, 1992.

Since its establishment, Storm has gone through many changes. The number of committees has been growing steadily (to 22 nowadays) and many surprising, epic and educational activities have been organised. Storm also has 5 working groups, that are always free to join. The shift to the new bachelor programme Global Sustainability Science in 2016-2017 has also caused many changes. Storm became an English study association and the number of first year students tripled. This unique character created an enormous diversity of members and activities. But despite these changes, the character of the association has stayed intact! Wherever you are from, whoever you are, whatever you look like and however you behave (to a certain extent): Storm is for everyone!

Within Storm, we also have societies (Dutch: disputen). These are groups of members with the same interest and/or share a common hobby. Societies are independent of Storm and do not organise any events. All societies are not active anymore but they could become active at any time! If you feel like bringing one of the societies listed underneath back or creating a new one, let the board know!

Ice-skating Society 'Windwak' did the same but for Ice-skating. They used to go Ice-skating with a devoted group of Stormers who enjoyed the ice!

Music Society 'Leuk dat je er band' organised musical activities such as jamming sessions. It was  a very small group of people back then so it was really like a Storm band! 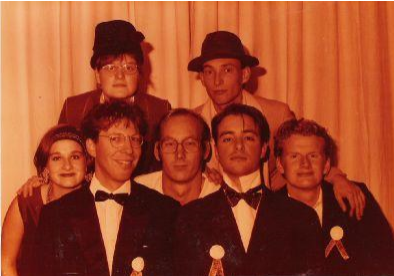