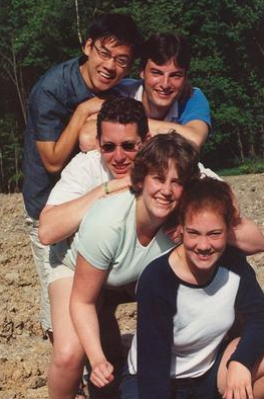 The 10th Board of Storm: Het Oog

A lot has happened! There are so many memories, I don't know which are which anymore. One of the first meetings of my board year will always stay with me: I  seem to remember that we just wanted to start with an Accie (Activity Committee) meeting. It was a quite warm day, and we were on the terrace of the Bacchant enjoying a cold drink. Two committee members came running to us, as asked: “Have you heard, have you seen it?”. We looked at them full confusion. Apparently, a plane had just flown into the WTC. It was on the news everywhere. Shortly after, thanks to CNN live, we saw the second plane embed itself into the second tower. Of course it was the subject of the evening, but weirdly enough we have continued the meeting, and decided which activities we wanted to organise in our year. On that moment we did not realise what kind of impact 9/11 would have.

No, we really did not! When you’re in the middle of Storm you don’t realise what kind of impact it will have on your future. It sometimes feels like you’re in the middle of the eye of a tornado. Where it’s windless, and you have no idea what’s happening around you. Only when the Storm has passed, you see the consequences… and hopefully they aren’t as disastrous.