The first Move team consisted of Maite van Dijk, Nienke van Dijk, Fabienne Horneman, Jeske van Loon en Iris Theunis.
We started the project with giving a series of classes about nature and environment to group 7 of Primary school De Groene Alm in Leidsche Rijn. The children also came to the university campus one day to see our day-to-day life, and it was a super fun day with a tour on the campus, a mini lecture and a nice lunch in the Storm room.
In the classes the children came up with a plan to make their neighbourhood a little greener by building a tiny forest! In collaboration with the municipality the tiny forest was planted next to the nature playing ground ‘De Hoef’ in December 2020. Due to the Covid-19 pandemic we unfortunately could not be present at the planting moment, but together with the class we will still officially open the tiny forest in June 2021!

The second Move team consisted of Myrte Blanken, Eva Colussi, Jorian van Oostrum, Valerie de Rijk, Sacha van Slobbe. Just like the first team, we set out to give some classes about the value of nature and the general concept of sustainability to kids from grade 7 at primary school ‘De Groene Alm’, in Leidsche Rijn. After walking around the neighborhood and conducting some interviews with local residents, the kids found that the biggest environmental problem in their neighborhood was the amount of waste on the streets. Therefore, they came up with a plan to make some cool posters to go on to trash cans in order to motivate people to throw their garbage away in the right place. After having visited us at the university, where we did a scavenger hunt around campus and attended a lecture from Floris van de Berg, we spent the afternoon with some creative HKU students to design the posters. A little while later they were actually printed and we could put them on the trash cans! Due to COVID the reveal was a little smaller than planned, but nonetheless very nice! Be sure to also check the aftermovie! 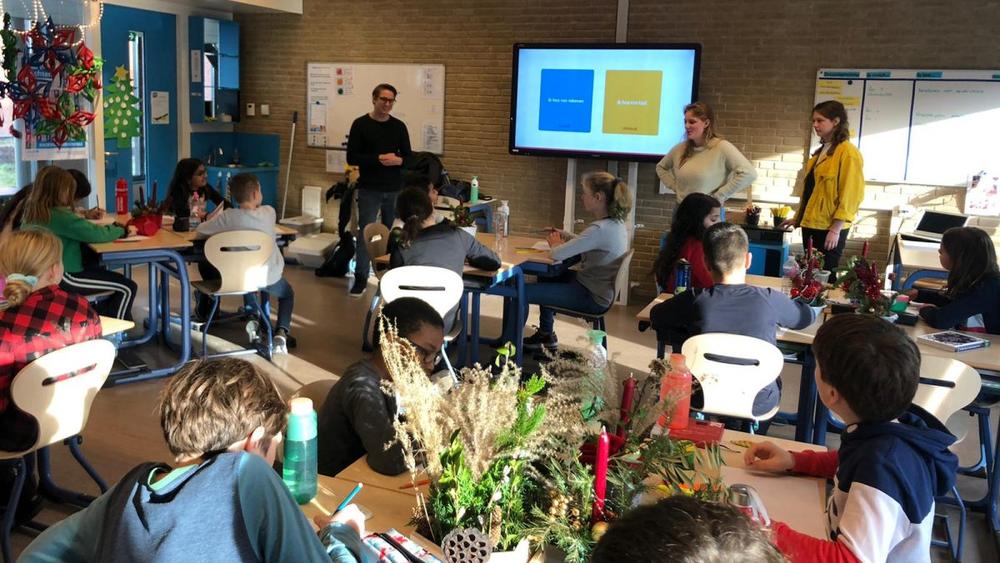