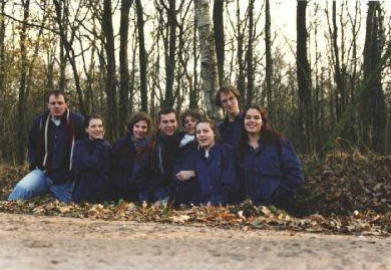 The 5th Board of Storm:

It’s Storm's first Lustrum, with the theme ‘Vijf Jaar Voor De Wind’ (loosely translated: Five Years the Wind In Our Backs), after having existed for five tumultus years. Lots of things happened and changed this year.

We finally entered the age of computers this year, buying a new one for no less than 1800 gulden. A new record in the amount of members was also reached this year, with a total of 212 paying members.

One of the tumultus events this year was that we once lost a board member… it was a few days after a Storm party (as notorious as they are), and we had not heard from one of our Board members in a while. After some investigation, we found out that our bird-loving board member ended up on one of the Dutch islands! Apparently, he was looking for some godforsaken special little bird. His ‘peeper’ had gone off, which resulted in him immediately leaving town. He even happily told us it was one of his ‘shame-species’, meaning that it was one of the birds he had never seen before, while he definitely should have. His Party Committee (and we) were not happy with it at all!