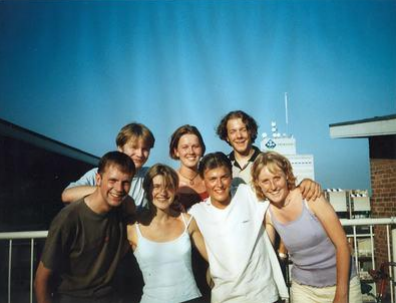 The 9th Board of Storm: the Stormtroopers

It was 2 november 2000, and somewhere in Tivoli the ‘99-’00 board of Storm gave way to the next in the endless estafette of the study association. That night we could look back on a successful year: we met our goals, the association was full of life again, and we could even say (very carefully) that the association was a bit healthier financially. The last board of the previous millennium had put out a good course for the coming year. In 1999, the introduction day of the bachelor started around 45-50 new students, and they managed to pick 7 fresh candidates who would become the board of ‘99-’00, also known as the Stormtroopers.

Before we even properly knew what a board year was, we were already trying to fulfil our tasks in the Storm room, during drinks, in other cities with other associations, at parties, during meetings, on weekends away and so on (it was a tough year).

At the general meeting this year we also decided to change the structure of Boards, shrinking the Board down from eight to five people, with now two commissioners handling all contacts with committees: Commisioners STOP and ALEX.

In contrast with other associations we did not get a full board grant, so we had to keep studying next to it. That was quite hard sometimes, having a board and activity-committee meeting every two weeks, and having to show your face at a party or drinks every week… Before we realised, the year was over already! It felt like a short year. Resolutions to be less busy the coming year failed miserably, so some of us joined some new committees and joined the Lustrum Committee. Storm is addictive!

We as the old board recently planned a weekend away. For all of those who I have met through Storm, some of those became my best friends! I wouldn’t have it any other way. Would I have ever wanted to miss it? No, I wished it would have been longer!