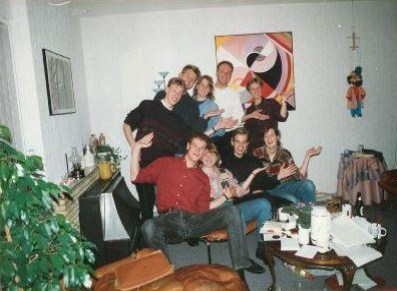 The 2nd Board of Storm:

On the 4th of November, 1992, the second board of Storm was formed, with eight members. Their task was forming the House Rules, which got approved on April 6th 1993. The amount of members doubled this year, and with almost 60 activities we really became a true association! The ‘Stormmelding’ (the Storm Magazine) was made almost professionally. We also welcomed our first society: Beaufort, which was a society for the alumni of Storm. Some committees were restructured as well, the PR-Committee and the Toekomstperspectievencommissie (Future Committee) became the Promotie en Beroep (Promotion and Career) Committee. The Onderwijs en Informatie (Education and Information) Committee split into the E&I and the Lezingen en Excursies (Lectures and Excursions) Committee, also known as the LEX.

For us, that meant that our study (which was sometimes a bit boring), became a lot more fun because of Storm. If I’m honest, I don’t think I would have finished it without it! So, for every environmental sciences student: stay and become a member of Storm, because it makes life in Utrecht that much more fun.