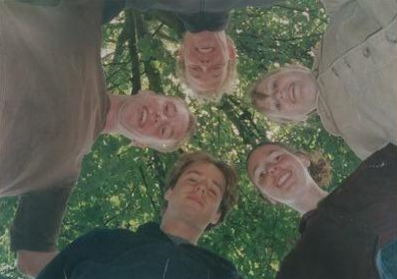 The 11th Board of Storm

One of my earliest memories of Storm is the then-board giving a sparkling recollection to a collection of new firstyears about how fun Storm is, and that we missed an amazing spectacle: the 10-year Anniversary of Storm, their Lustrum! Luckily our year was not without adventures as well.

One of the large changes in our year is of course the change from guldens to Euros. We had to change the membership fee from 15 guldens to a neatly calculated 6,81 euros, which we changed to 7 euros without permission from an ALV… (we got a huge profit of almost a whole euro because of this).

We were also proud of the fact that we now also have as many committees as donors! Commissioner ALEX and STOP: two terms that are inseparable from the ups and downs of Storm board life, even though these names will probably be replaced by more fitting names in the future.

And the parties… lest we forget about them! I will always remember our slightly shady parties in the Bodytalk bar, where we had to clean the bar every time we had a party, from the last gay foam-party that was organised there, before we dared to let Stormers in… we had our constitution drinks there as well, and as shameful as it is, we lost our Pedel staff! Usually, you get notified of a ‘loss’ after such a party, but after months we hadn’t heard anything. Until, about half a year later, we organised our next party in the Bodytalk--and there was our Pedel, hidden in a corner! It had survived countless foamparties, and we dare not imagine what had happened to it during that time…

But oh well, as Beatrix said: change is the only constant in our lives, so, why does this not count for Storm as well? I speak for all of my board members when i say that it was a pleasure to keep Storm alive, despite all of the changes we have been through (paying for books electronically??). Long live Storm!